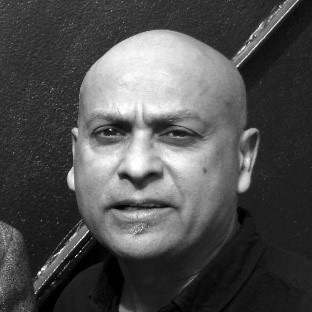 Ganesh Anandan is an Indian percussionist active in musical fields ranging from traditional Carnatic to contemporary improvised music. He studied the kural (bamboo flute) and the mridangam (trad. percussion instrument) in his native city of Bangalore, India, before moving 1976 to Canada, where he studied piano and western percussion and began his prolific musical career. As an experimental luthier Ganesh started building Percussion Shruti Instruments in 1995 based on the Indian 22 interval octave. He built the electric 6 and 12 string shruti stick, which he usually prepares to obtain a wider sonic palette of tonal and percussive sounds and developed unique personal playing techniques including transposed Carnatic finger drumming style on these instruments.
Ganesh has worked with a variety of international artists and ensembles including: Ensemble Modern (for which he wrote a piece in 2005), Conny Bauer, Hans Reichel, Omar Sosa, Malcolm Goldstein, Glen Velez, Bob Brozman, Glen Moore, Kazuhisa Uchihashi, Ramachandra Borcar, Ramesh Shotham, Karnataka College of Percussion, Debashish Bhattacharya, sculptor Pascal Dufaux and in the field of theater & dance: Nouveau Théâtre Expérimental, Robert Lepage, Margie Gillis and many others. He has recorded numerous CD’s and has been commissioned to compose music for various Film, Theatre and Contemporary Dance projects. 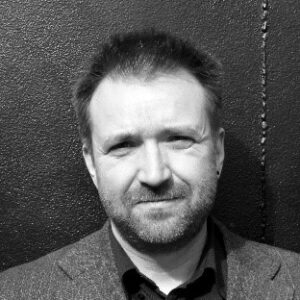 Kriton Beyer is a Greek-German musician and composer who works – as a performer and improviser – mainly with the harmonium and the daxophone.
He studied musicology at the Aristotle University of Thessaloniki in Greece. From 1990 – 2004 he played with a variety of local music groups in Greece. In 2004 he moved to Berlin, where he got heavily involved in the improvised music scene of the city.
Since then, he has worked with many musicians like Kalle Kalima, Fred Lonberg-Holm, Kresten Osgood, Tristan Honsinger, Tomomi Adachi, Richard Scott, Willi Kellers, Matthias Bauer, Antonis Anissegos, Olaf Rupp, Els Vandeweyer, Harri Sjöström, Nicola Hein and Liz Allbee. Kriton Beyer is a member of the electroacoustic trio “uproot”, the ensembles “Redox Reaction”, “AEAEA” and the “Berlin Soundpainting Orchestra”. He is involved in the multimedia project “Dark Eye“ with Korhan Erel and Nicolas Wiese, the movement, sound and light experiment “enLIGHTenment” with butoh dancer Yuko Kaseki and has cooperated with japanese visual artist and live painter Akiko Nakayama.
As an improvising musician, he has performed throughout Europe. His compositions are largely based on conceptual art. Kriton Beyer has also conceived and commissioned the music software CinePrompt®, which was specially developed for the use for live musical performance and live recording to films. He curates and manages the concert series and record label “The Procrustean Bed“, dedicated to Experimental Improvised Music. 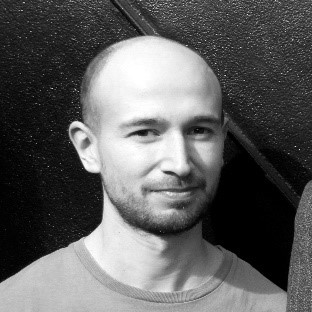 Marcello Lussana is an Italian composer, musician and programmer who specializes in interactive systems. His work especially focusses on the relation of music and human movement. He holds several degrees from various European universities: a Master degree of Sound Studies at the Berlin University of the Arts (UdK), a Master of Technology and Communication Studies at the University of Turin and a diploma in foreign languages and literature at the University of Bergamo.
Marcello Lussana produces computer music for audiovisual performances, dance, and theater and established himself as an improviser in the Berlin ‘Echtzeitmusik’ scene as a live electronics musician. As a performer, he uses Max/MSP, Pure Data and Supercollider Patches for interactive environments as well as Motion Composer Software that he developed himself. He is the musical director and project manager of the Motioncomposer project and co-founder of the netlabel Fantomton. Marcello Lussana lives and works in Berlin.